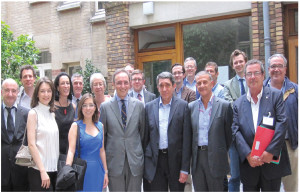 For a girl like me, who is entering the professional world and has now taken an active part in the complex and multifaceted reality of an hospital for a relatively short time, a meeting with professionals in the area, who have received the same training and who have now several years of experience behind them, could only be an occasion you cannot miss.

The first training session of the Jesuit alumni belonging to specific professional areas was held in Paris from June 29 to July 1. In this case, the medical area. The meeting was attended by about thirty alumni from all over Europe, mainly doctors.

The theme of the conference was “Medical Practice with a Human Face.”

The idea of this meeting was initiated by the European Confederation of Jesuit Alumni, at the invitation of Father General Adolfo Nicolas SJ, made at the last world meeting alumni, when he invited us to be men and women of depth, with the other and for the other.

For most alumni daily life revolves mainly around the family and professional life, and it is in these contexts that the invitation should materialize.

In Paris, the meeting was structured in a way that five teachers would introduce a topic and did their presentation followed by a discussion involving the whole group. The small number of participants allowed discussions during times of training and gave the chance to know each other and interact personally during social occasions.

The first to speak was Professor P. Andrea Vicini, SJ, a pediatrician and professor of moral theology at Boston College. P. Neighbours spoke mainly of the virtues of medicine, the importance of checklists to reduce medical errors and the promotion of justice at the global level, which led to a vigorous debate.

Prof. Jean-Louis Misset, an oncologist, then spoke. He raised the interesting question of the possibility to treat patients even when the Evidence Based Medicine considered today to be the best model of care did not anticipate. The rapporteur believes that such an approach is widely accepted to hinder scientific progress and deny the patient the right to hope to be part of that small percentage of cases for which the drug is effective. All this, however, raises the vexed question of life-prolonging and the huge costs involved.

The economic aspects were dealt with by Prof. Carlo Fronticelli, surgeon, who has faced the difficult and extremely relevant issue of resource allocation in the health sector, turning the interest of all. In particular, he referred to the importance of optimizing the cost according to the criteria of equity, effectiveness, efficiency (and therefore cost-effectiveness ratios, cost-effectiveness and costutility) and appropriateness.

Fr. Patrick Langue SJ, Manager of the Centre Laennec, explained the aims and activities of this prestigious centre of which we were the guests. It is exclusively dedicated to students in medicine. Students, admitted in small numbers compared to the number of applications, are guided in their scientific training, as well as in their human and spiritual journey. Fr. Langue told us how he considers essential to complement the study of scientific subjects with other activities such as the arts, theatre, painting and volunteering as well as personal confrontation with him when the student comes into direct contact with the reality of the hospital. I was personally impressed by the attention to the best possible scientific level, of course essential, combined with the focus on human formation and growth of the students, which in our universities is too often left on the sidelines. It would be desirable, dare I say exciting, to propose such a comprehensive approach in other universities.”

Prof. Stephan Claes, a psychiatrist, talked about new frontiers in this fascinating field of free will , in the light of recent neurobiological theories whereby every choice is actually dictated by the particular pattern of the neurotransmitters. I think I was the only one to appreciate this exciting report on particular issues frequently dealt with by the superficiality of scientific papers.

The speeches have addressed various topics of great interest, arousing the active participation of all.

The program also included a moment of silence in the chapel of the Centre Laennec, with a Eucharistic celebration officiated by Father Langue.

There were also very pleasant convivial moments. Every detail has been carefully organized and, not negligible, especially for us Italians, our meals were always excellent.

Special thanks go to Eric de Langsdorff, Former Student of S. Louis de Gonzague in Paris, who has actively participated in the development of the meeting and invited us to dinner at his beautiful family home.

Since our first meeting on Friday evening, you have created a very pleasant atmosphere of collaboration and desire to know one another. We felt almost at home, in confidence, thanks to a common feeling but it did not stop us from taking different positions during discussions and to differ on the basis of differing opinions, always with great respect.

It was also very pleasing to see how the difference in age was not a limiting factor to relationships but, on the contrary, one more opportunity of comparison, exchange and enrichment, especially for us young members of the group. I was pleasantly surprised to feel so united with people you’ve never seen before, in the first few minutes after we were introduced. This rarely happens in the daily life, and especially in the business world, often polluted by envy and excessive competition. So I think the turning specifically to a professional area has been a major strength of this project, making it possible to compare true and honest with the professionals of their field, who face similar challenges every day and often found the same difficulties. I think it was really a great idea to give the opportunity to understand how to practice each day, each in his own context, the invitation to be men and women of depth, with others and for others.

We are now all used and forced-to make our daily lives a race against time: take three days to awaken our critical spirit, our ability to reflect more deeply on topics that are part of our everyday life, with other professionals, in a climate of openness and friendship, it was a gift.

“Many thanks to Chris Thürlimann Secretary ECJA and Frank Judo President ECJA who have been so much involved in the success of this great initiative.” The experiment was a complete success: see you next year!

Alumna of the Istituto Massimo in Rome (grad. 2005)

Secretary of the Alumni association of her school.

Medical student at the Università La Sapienza in Rome