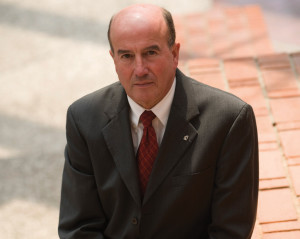 « Fr. Morales brings an extraordinary background to this position: former provincial of Mexico, former president of Iberoamericana University in Mexico City, former assistant to Fr. General Kolvenbach for Jesuit formation, etc., etc. He will certainly be an excellent addition to the WUJA family as you move toward a new renaissance », he wrote.

« Let me take this opportunity to thank you for the pleasure and privilege of working with you during the past four years. I am deeply grateful for the spirit of friendship and cooperation you have shown me, and I am sure you will continue to work well with my successor as you strive to activate WUJA’s tremendous potential for good in the world. Please remember me in your prayers now and then, and be sure that I continue to remember you in mine. God bless you and God bless WUJA! », he added.

Alain Deneef, WUJA’s President expressed WUJA’s and gratitude to Fr Bill Currie sj for his contribution, efforts and commitment during the four years he held the position of WUJA’s spiritual counsellor. Despite the distance, Fr Currie sj always made the trip from Japan where he lives to attend WUJA’s meetings, thereby showing his full dedication to the World Union. The latter addresses her best wishes to Fr Currie sj for his continued mission in Tokyo.

At the same time, WUJA’ Council warmly welcomes Fr José Morales Orozco, sj and rejoices at his joining WUJA in this exciting phase of its development.

Later, in 1982, he entered the Pontificia Universidad de Comillas in Madrid where he obtained his doctorate in Theology with his dissertation The Epistemology of Theology in the Puebla Documents. Upon his return in Mexico, he was appointed Rector of the Instituto Libre de Filosofía y Letras and Superior of the Philosophate of the Society of Jesus.
He was appointed Provincial of the Jesuit province in Mexico in 1989. He served in that capacity until 1995. He was also president of the Conference of Mexican Priests and Nuns (CIRM) and president of the Conference of Northern Latin American Provincials from 1990 to 1995. At the end of Dr. Morales’ appointment as Provincial, Father Peter-Hans Kolvenbach, S.J., Superior General of the Society of Jesus, called him to be his general counsellor responsible for the formation of Jesuits and the promotion of vocations.
On July 8, 2004, Dr. Morales was elected Rector of Universidad Iberoamericana Mexico City for the period 2004-2008. This year, the General Assembly of UIAC Associates ratified him as Rector of Universidad Iberoamericana Mexico City for two more years. During its last meeting, the Asociación de Universidades Confiadas a la Compañía de Jesús en América Latina (AUSJAL) elected him as its President for the 2009-2011 period.
In addition to Spanish, Dr. Morales speaks Greek, Latin, English, French and Italian.