Magdalena Myszk, alumna of the High School of Gdynia, testifies for us about her time spent therein, a Jesuit school that is celebrating, this year, its 25th anniversary. Although its Jesuit priests were killed under the Second World War and its doors shut during the communist era, this high school of the little port town of Gdynia, in northern Poland, breathes again, shows that it is still there and well alive!

Twenty-five years, a quarter of a century, is a long time. However, it is not comparatively long when something new is created. The Jesuit High School of Gdynia, which is celebrating its 25th anniversary this year, was created anew. Now, like all of Poland after decades of communist rule, it is evolving upon its strong foundations of the past.

Before we describe the current school, let us go back in time to the early twentieth century. For Poland the twentieth century was a period of storms and historic changes: World War I, in the wake of which Poland regained independence; World War II, which brought destruction and misery; and the period of communism, when Poland was behind the Iron Curtain. In 1937 Gdynia, a town by the Baltic Sea in the north of Poland, was rapidly growing ‘from the sea and dreams’, as was then said. It was there that a secondary school was founded by the Jesuits on temporary premises. Unfortunately, the outbreak of World War II spelt the death of the school, as the Jesuits from Gdynia were murdered in the woods near Piaśnica. The end of the war in 1945 was a chance to start the school anew: thanks to the zeal of students and Jesuits who were coming to Gdynia from all over Poland the school was reopened. Jesuit fathers met with boys traumatised by the experience of war and their work was far from easy. The teaching did not last long, however. Poland was subjugated by the Soviet Union and the state authorities disapproved of the Roman Catholic Church; as a result, the Jesuit school was closed down. 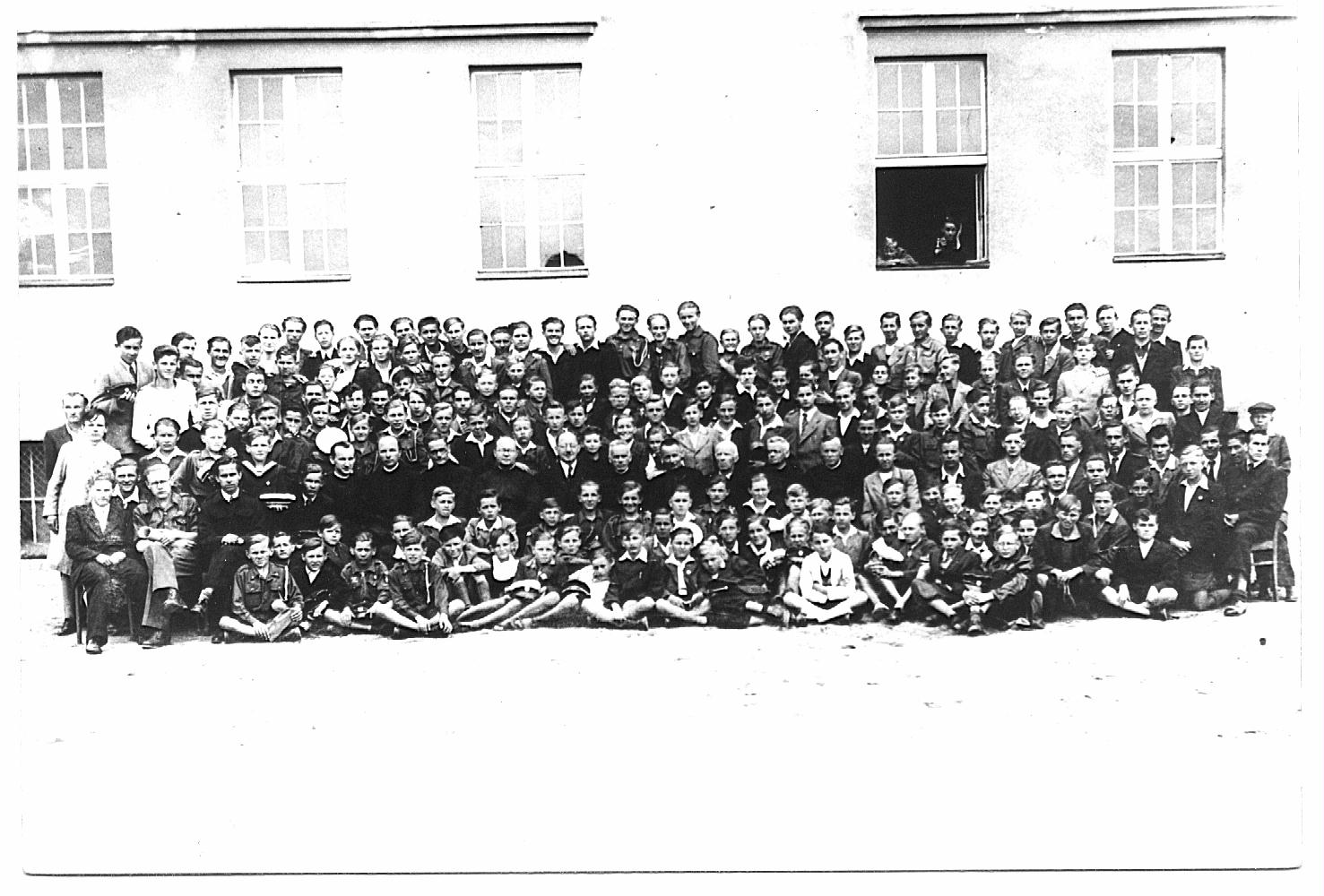 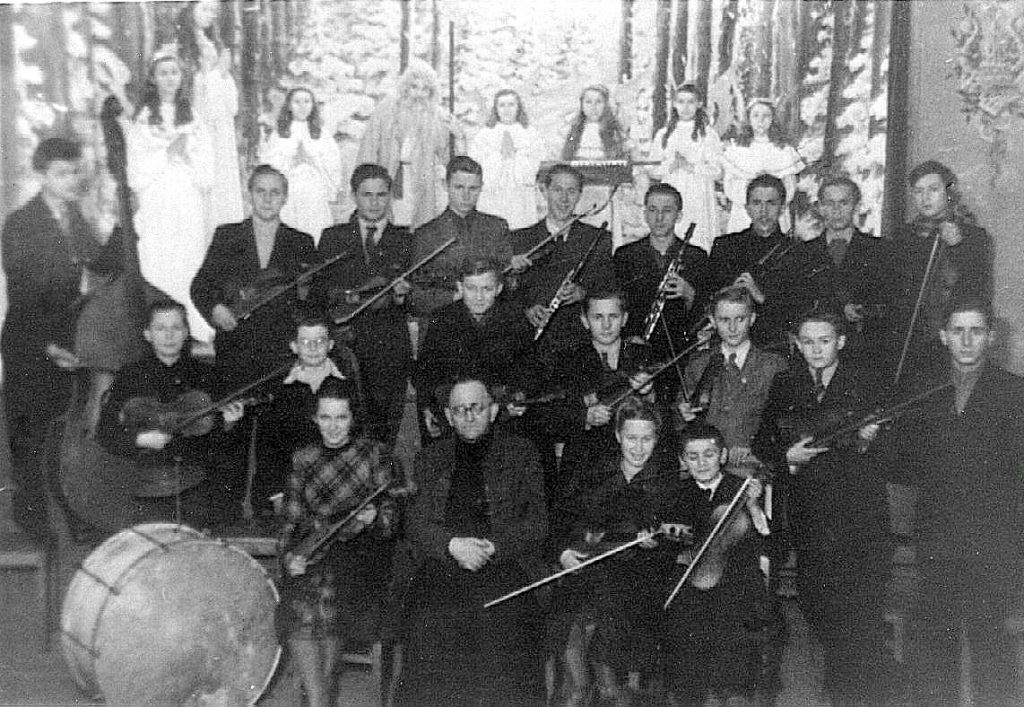 The period of communism was a difficult time for Poland: the school was not allowed to reopen and the boys, who were sent to other schools, experienced hardship, as did the entire nation. It took forty years for a breakthrough to take place; in 1989, thirty years ago, the first free parliamentary elections in Poland marked the end of communism. Poland began to develop its free market economy and build the foundations of democracy. In Gdynia one could again dream of a school run by Jesuits. An idea appeared to build a new Jesuit school in a place where it had been planned many years before. From the very beginning alumni of the Jesuit Secondary School of Gdynia were involved in the making and implementing of plans to found the new school, and they continue to support the school today. Their will to act and succeed, their passion and perseverance, were major factors that contributed to the successful opening of the Jesuit High School. In September 1994, on what is often called Jesuit Hill in Gdynia, the school bell rang for its first students.

At first classes were held in the parish church building. The school had no gymnasium or swimming pool, hence all PE classes had to be taught in the facilities of other schools. School courses would begin after the end of the evening mass and the smell of incense in the corridors was anything but unusual. The first Headmaster was Fr Tadeusz Pawlicki, SJ, a charismatic, creative and truly unique person whose culinary talent for making the traditional Polish stew is still considered legendary. The students’ green school uniforms made them stand out in the crowd in Gdynia and people recognised them easily as members of the Jesuit school community. The atmosphere of the school in a church was inimitable. However, the ever growing number of students required the school to move. Thanks to the effort of Jesuits, helped by the alumni of the previous school and numerous other friends, a cornerstone was laid and thus the construction of a new school building began. The new building was designed by an alumnus of the old school. A state-of-the-art building rose on Jesuit Hill, one that was comfortable for students as well as adjusted to the needs of people with disabilities. 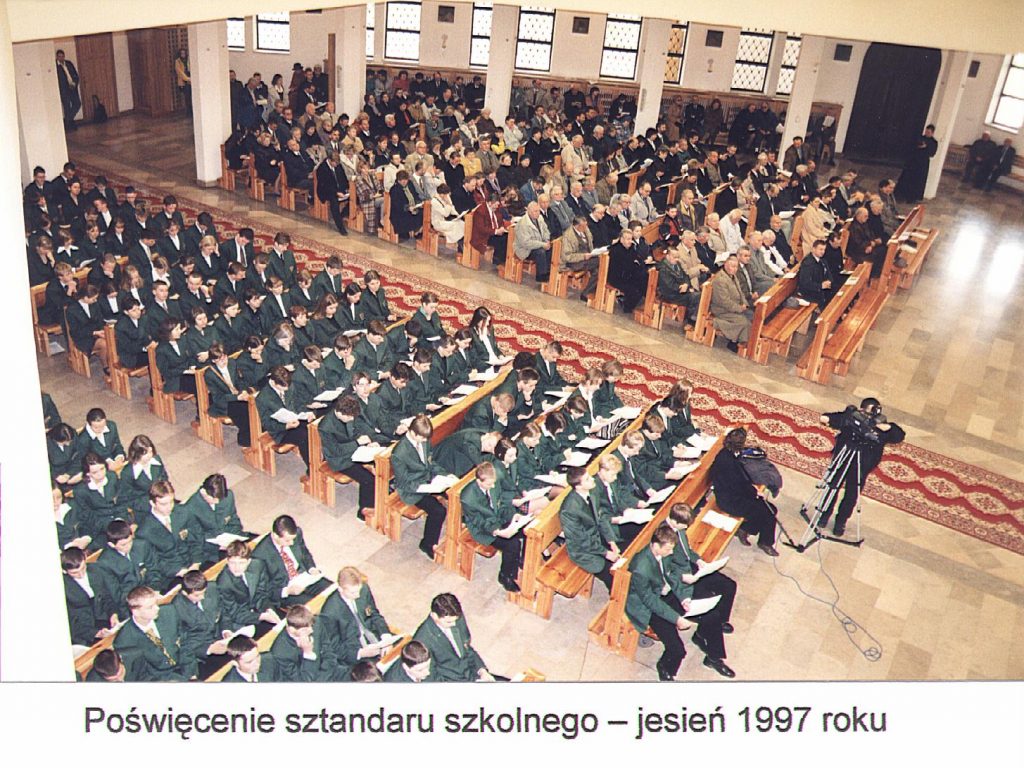 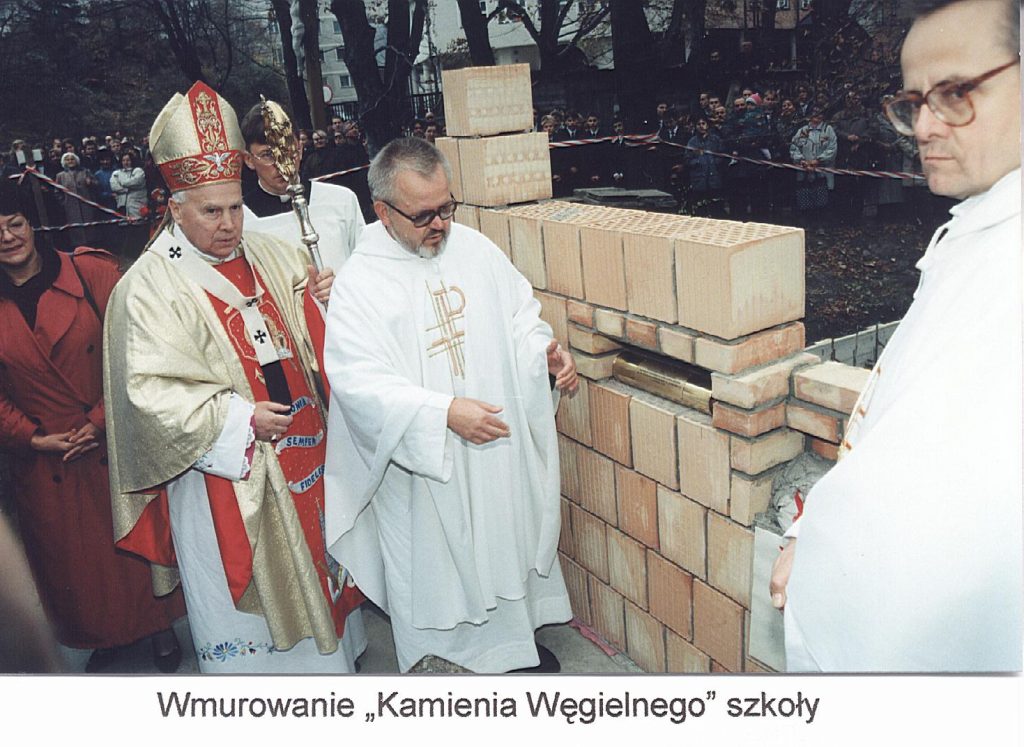 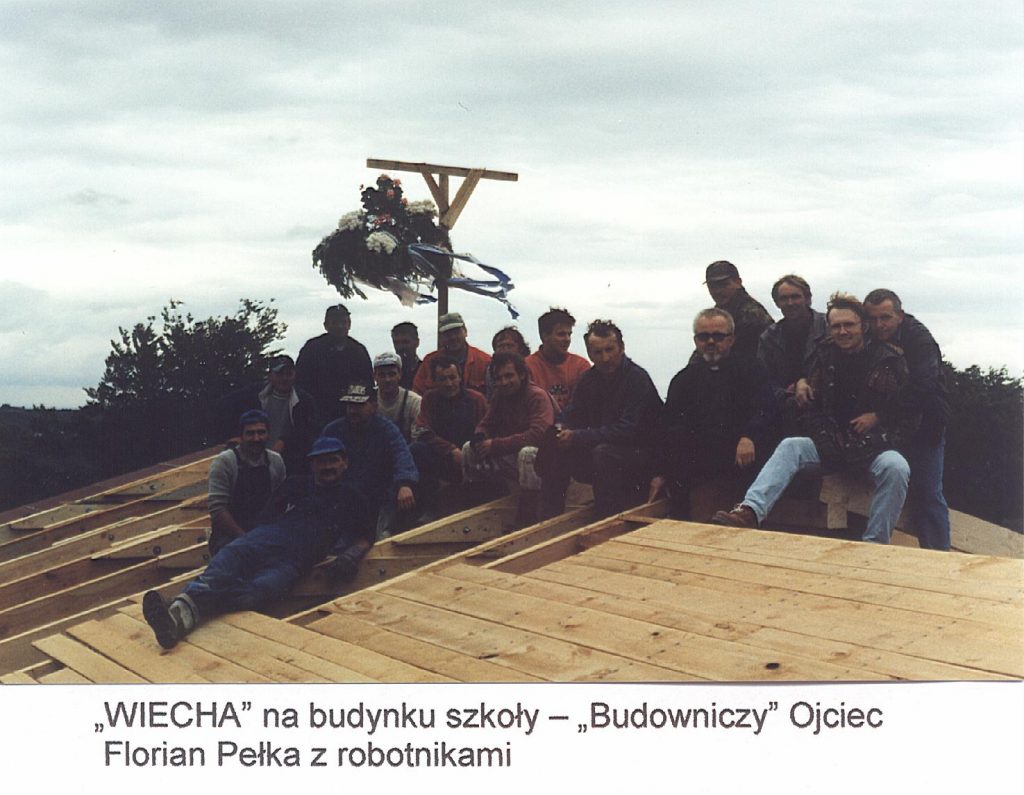 One of the most important events of that time was the visit of the Superior General of the Society of Jesus Fr Peter Hans Kolvenbach, SJ. I was a student at the time and still have photographs of the event. As time went by, generations of students and foreign exchange guests arrived at the school. For twenty-five years of its existence the school has cared for not only its operating conditions but also relationships with schools from abroad and international student exchange programmes. Sports facilities were opened, including a swimming pool that is now considered one of the best pools in Gdynia, as well as facilities allowing for a variety of extracurricular activities to be done, thus helping students practise their hobbies. 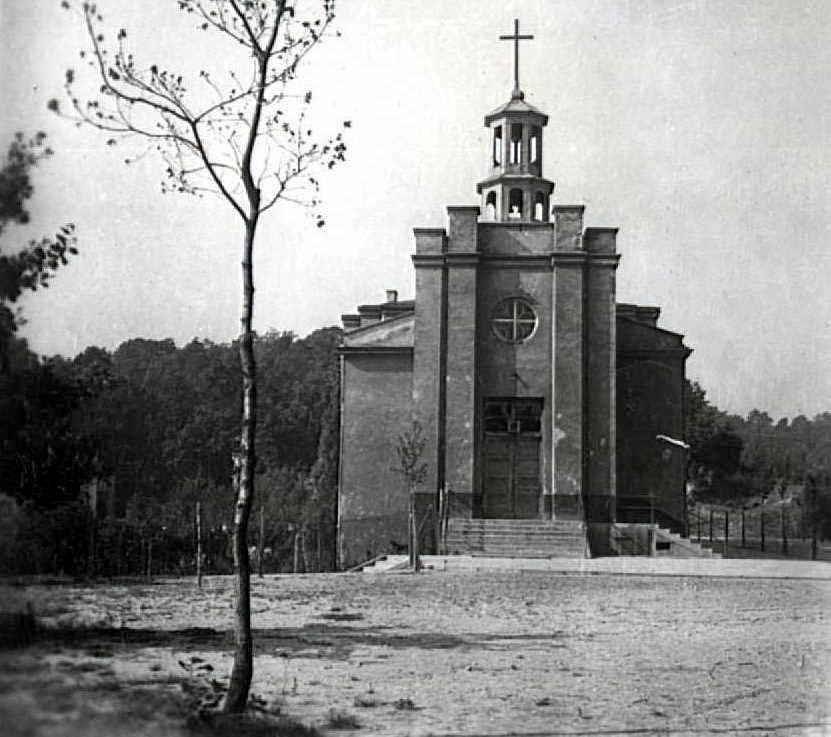 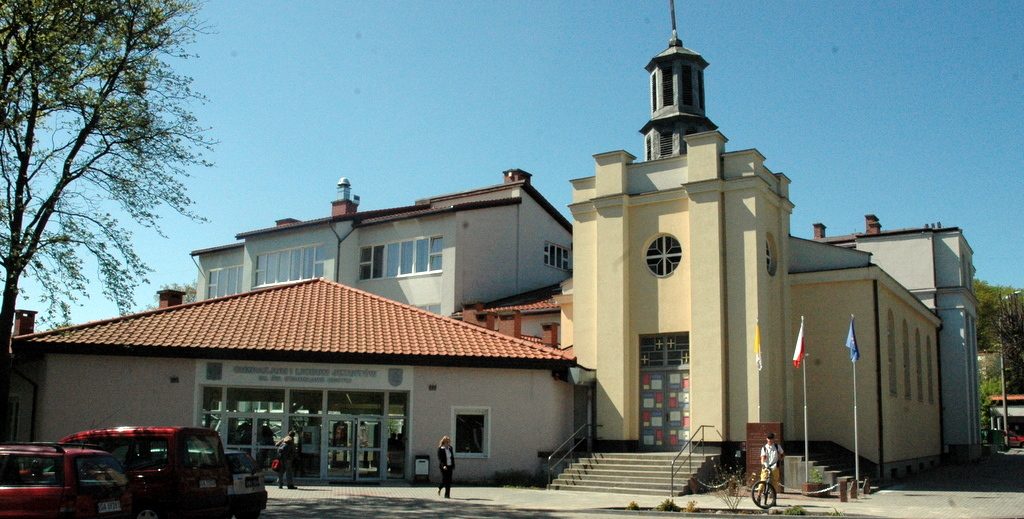 Partly thanks to sponsors and friends of the school, more and more rooms have been furnished with various equipment enhancing students’ learning process. The heads of the school continually needed to meet the challenges of the changes taking place in Poland’s education. The first major change was the introduction of lower secondary schools. Thus in 2001 the Jesuit Lower Secondary School came into existence, sharing the building with the High School. In 2017 lower secondary schools were abolished by the government, which made the school’s authorities decide to open a primary school. As of 2019, the Jesuit Schools of Gdynia on St. Stanislaus Kostka Hill consist of a high school and a primary school.

Naturally, a school is a building where classes are held, including its furnishings and equipment; however, the concept denotes first and foremost its people: headmasters, teachers, other staff members and students. Throughout 25 years the school has had several headmasters, who managed the school at different stages of its evolution and bore the burden of various duties to do and problems to solve. It appears today that their efforts have been very fruitful. Unfortunately, many of these people, ones who left their mark on the school by helping to create it, supporting it and sharing their ideas, are no longer among us. Had it not been for their efforts, determination and hard work, the school would not be what it is today. One must not fail to mention the alumni, who were shaped by the Jesuit school. Many of them, on having completed their school, continue to support the school to the best of their ability. For instance, the first mass celebrated in 1994 was conducted by Cardinal Gulbinowicz, an alumnus of the pre-war school – this is but one of the many examples that could be enumerated here. The youngest alumnae and alumni of today also stay in touch with their school by supporting it and building personal and professional relationships based on their school acquaintances.

To summarise the twenty-five year history, the changes that took place in Poland made it possible to open (though ‘reopen’ appears to be a more fitting term) our Jesuit school. Like all of our country after the fall of the Soviet bloc, the Jesuit school had to learn to walk before it could run. The school keeps developing and implementing new ideas, and it is completed by more and more alumni who therefrom begin their journey of adult life and make it in the world outside. Here, as a person born and bred in Gdynia, I wish to mention one famous Jesuit school alumnus: Eugeniusz Kwiatkowski, who was a significant figure in inter-war Poland as a Deputy Prime Minister, Minister of Industry and Trade (1926-1930) and Minister of the Treasury (1935-1939).

Words will not do justice to what the Jesuit School in Gdynia is like and what views of Gdynia and the sea can be seen from the top of Jesuit Hill – one needs to see it for oneself. Hence let me, an alumna of the silver jubilee school, invite you to Gdynia.