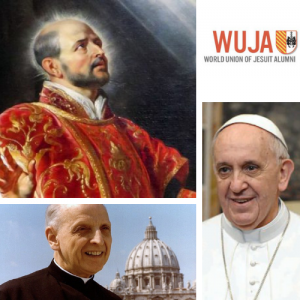 As we celebrate today, the feast of the founder of the Jesuits Ignatius of Loyola, let me bring you back in time. The 31st of July 1973 was no ordinary feast of Saint-Ignatius for the Society of Jesus, but no one at that time could imagine that the two events taking place on that same day would shape the destiny of the Society.

In Valencia, Spain, the Jesuit Alumni of Europe were gathering for their tenth congress and they were to be spoken to by the General of the Society of that time, born in the same Basque Country as Ignatius of Loyola. His name was Pedro Arrupe.

On the very same day, on the 31st of July 1973, the feast of Saint-Ignatius, about 10.000 km to the West, another Jesuit was becoming provincial of his country. His country was Argentina and the name of that second jesuit is Jorge Mario Bergoglio.

The first was expressing in front of the European Alumni what would be his legacy to the Society of Jesus, its Alumni indeed and to the Church. And he did so by coining a phrase that now animates, energizes and even possesses millions of people around the world. He asked them to be: ‘Men and Women for Others’

The second was becoming discretely the primus inter pares, the superior of the Argentinian Jesuits in very tumultuous times for his country. We know what ensued and how Jorge Mario Bergoglio subsequently became archbishop of Buenos Aires, and later Pope under the name of Francis

But, think of this, isn’t it an extraordinary feat that on the same day, more than forty years ago, on both sides of the atlantic, two Jesuits were taking up responsibilities that resonate until today?

Pedro Arrupe was announcing, like the prophet he was, to the Jesuit Alumni of Europe, a little bit in a state of shock, that the service of faith was not to be separated from the promotion of justice.

Jorge Mario Bergoglio, was assuming, like a pastor he is, the first of a series of responsibilities, at a time when and in a country where he would have to discern in order to preserve and protect his fellow companions and the Society of Jesus as a whole.

God works in mysterious ways and sometimes his synchronicities are occasions to recollect.

46 years after these events, let us celebrate Saint-Ignatius who ignited a fire who kindled these other fires. And let’s pray in gratitude for what these two men have brought and still bring to us all and many others in the world.