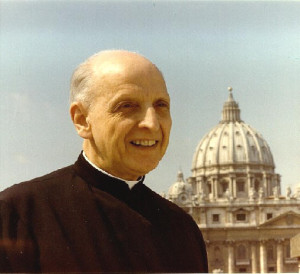 Father Pedro Arrupe passed away on February 5, 1991. This day is always an occasion for us to say a few words about this man of unfailing wisdom and confidence. As Pope Francis made a historic visit to Japan last year, he did not fail to pay homage to the 28th Superior of the Society of Jesus; just as he was able to do so again just a few days ago in front of the present Superior of the Society and nearly 200 other lay faithful people in the service of the Society. As a reminder, a cause for the beatification of the native of the Basque Country was officially opened a year ago to the day.

“Father Arrupe always believed that the service of faith and the promotion of justice could not be separated: they are radically united.”

These were the words pronounced by Pope Francis on November 7 in front of the Superior Arturo Sosa and 200 others on the occasion of the 50th anniversary of the Secretariat for Social Justice and Ecology of the Society of Jesus. These are the words that, one year to the day after the reception of his cause for beatification, inspire our lines on the occasion of the commemoration of his death 29 years ago.

On February 5, 1991, Father Pedro Arrupe, 28th Superior of the Society of Jesus, passed away, resting in the peace of the Lord. Born in Bilbao, this student in medicine joined the Jesuits at the age of twenty. A year earlier, he lost his father and, trying to mourn him in prayer, he went on a pilgrimage with his four sisters to Lourdes, which he will always consider “the city of miracles (…) where my vocation was born, in this atmosphere both simple and grandiose, at the feet of the Virgin Mary (…)”. In 1932, when the Jesuits were expelled from Spain, their land in many historical respects, by the Republican government then ruling the country, Pedro Arrupe continued his studies, first in Belgium – where one of the auditoriums of the University of Namur, a Jesuit one, bears his name – and then in the Netherlands and the United States, where he was ordained a priest in New York and served as chaplain to Spanish-speaking prisoners.

In 1938, always wanting to be a missionary (which is far from supernatural as a Jesuit), he left for Japan in 1938, where he was appointed novice master in Hiroshima. There, in 1945, he witnessed firsthand the horror perpetrated by the hand of man: the first of two atomic bombings of the Japanese peninsula as a means of imposing surrender to the Japanese Imperial Army. Yet – and this is surely a miracle of the Virgin of Lourdes on her beloved protégé – the bomb dropped by Enola Gay will fortunately not hit Pedro Arrupe; not even the radiation that came out of it. This will allow him to devote himself and his novices to help the survivors, the wounded and the dying.

Returning last November in the footsteps of Don Pedro, Pope Francis did not fail to greet his counterpart (whom he had once met in Argentina), on the occasion of this historic trip to the land of the Rising Sun (the first of a pope in Japan for 40 years). After a moving moment of meditation on the hill of Nishizaka, where the first Japanese Christian martyr, Paul Mikki, was crucified in 1597 with other companions, Pope Francis visited the two bombed cities in the south of the peninsula in succession before going to Tokyo Cathedral. He recalled the memory of the “Typhoon”, as Pedro Arrupe was nicknamed, by inviting the Jesuits to follow in his footsteps, to be “charity workers”. 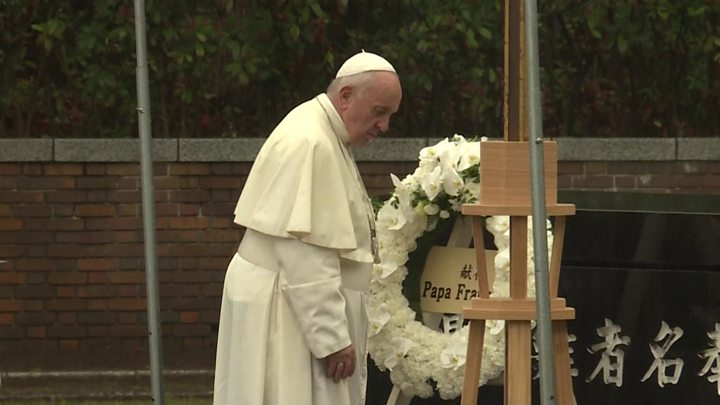 The one who later became Provincial Superior of the Jesuits in Japan was elected on May 22, 1965, on the death of the Belgian Jean-Baptiste Janssens, 28th Superior General of the Society of Jesus; he became one of the actors of the spirit of the Second Vatican Council and a spiritual leader of his time.

It was this criterion that mainly caught the attention of the Society of Jesus when it deposited the cause for beatification to the Holy See. One year ago to the day, on February 5, 2019, Cardinal De Donatis, the Pope’s Cardinal Vicar for Rome (the city in which Pedro Arrupe died) opened the cause for beatification “of this true man of God” in the heart of the Roman Basilica of St. John Lateran, recalling how Father Arrupe wanted to promote “the rediscovery of Ignatian spirituality”: “Within this framework and starting from the texts of Saint Ignatius, (…) he lived personal and community discernment and transmitted and applied it to his way of governing the Society of Jesus, with fidelity to the “way of proceeding” of the Order. ”The Cardinal added: “For Father Arrupe, it was a question of becoming men and women for others”, underlining his way of caring for others, and especially his capacity for trust.

For all these qualities – and for so many others – it seemed worthy to pay tribute to this man, “prophet of the conciliar renewal” as Father Kolvenbach, his successor at the head of the Company, said, and for whom we await with wisdom and confidence his elevation to beatification.