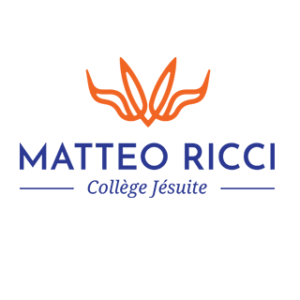 Melissa Vida, a young freelance journalist who regularly writes for the Jesuit news site “America Magazine”, is talking to people across the Atlantic about the new Belgian school that the Jesuits founded last year in a district of the capital city of Belgium, Brussels, considered by some to be “difficult”.

In Cureghem/Kuregem, the poorest district of Anderlecht (one of the 19 communes that Brussels is made of), where unemployment is at record levels of over 30%, the Jesuit Matteo Ricci College is trying to provide a positive response by welcoming 60% of its students from the Muslim minority, but also others from the Hispanic, sub-Saharan African and Eastern European communities. This mixture of multiple identities, for which the new Jesuit school aims to make it the new responsible elite of tomorrow at the service of these complicated neighborhoods but which are yet humanely so rich, is a real message of hope at a time when the problems relating to the general decline in educational levels seem to be phagocytizing goodwill initiatives. The Matteo Ricci College is certainly the latest in the universe of Jesuit institutions in the world, but we are far from having heard the last of it. There is no doubt that there will be a new home for the alumni who will join WUJA within the next 4 years! 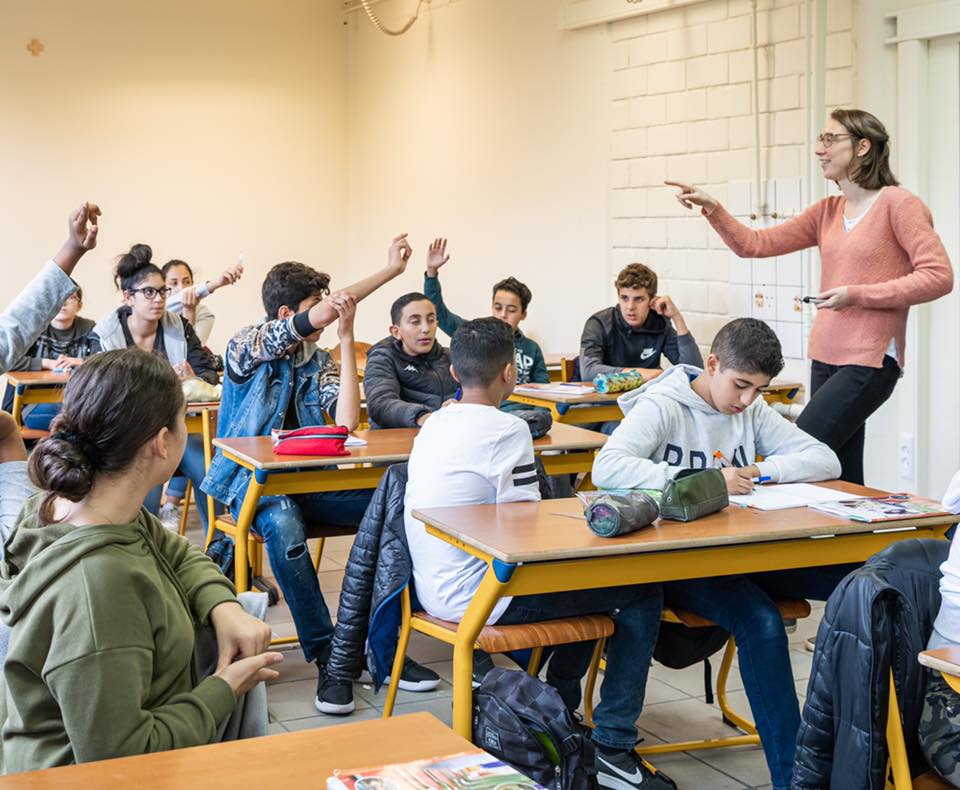 Secondary school students get to work in September at the Matteo Ricci school in Brussels. (Photo courtesy of Matteo Ricci.)

At the 8 a.m. bell, French-language rap music blasts through the loudspeakers above the playground of a new Jesuit school in Brussels. Its students, 12 and up, pick up their bags, shuffle themselves together and head toward their classrooms. It is the start of a new school day.

The Matteo Ricci school opened its doors in September 2019 in the heart of one of the most densely populated and impoverished neighborhoods of Brussels, home to families who have migrated to the European capital from all over the world. Most of the school’s students come from Arab backgrounds, while others are of sub-Saharan African and of course European origin and descent.

In Europe, where Jesuit schools have traditionally catered to pupils from middle- to high-income families, the Matteo Ricci school, located between a homeless shelter and large avenues leading to a busy train station, is setting a precedent.

For Alain Deneef, who launched the project and later became one of the school’s board members, Matteo Ricci represents a pilot project that could be emulated elsewhere in Europe.

“Apart from a couple of schools in Spain, I do not think there are many others like us, but there will be more, and that is why everyone is watching what we are doing,” he told America.A bank loan helped open the school, but it also received funding from the Belgian government, the Society of Jesus and private donors.

Jesuit schools similarly directed to underserved and low-income communities, like those connected through the Cristo Rey network, have for the most part thrived in the United States.

Jesuits in Belgium wanted to launch a new school that would reach less-affluent communities, but they were also keenly interested in connecting with “people from different cultural and religious backgrounds,” Mr. Deneef said. The majority of pupils here at Matteo Ricci are Muslim.

“If I have to boil it down, we want to educate the future leading elites of the Muslim communities in Brussels,” he said, noting that the city and nation will need their leadership and contributions in the future.

The neighborhoods of Brussels where halal meat shops, Western Union remittance offices and the Arab language are prevalent were overrun by media in the aftermath of the 2015 Paris terror attacks. It was from within these marginalized communities that elements of the terror network which launched the attacks in 2015 emerged. Some schools in these neighborhoods in northwestern Brussels—often dubbed Brussels’ “poor crescent” corridor—have been derogatively called “trash schools” because of their high levels of violence, dropout rates and overwhelmed teachers.

According to some estimates, more than 30 percent of youth from the “poor crescent” neighborhoods are jobless. Mr. Deneef acknowledges that “the good schools are not in these neighborhoods,” but he wants to change all that.

Last September, students from 42 different schools converged on Matteo Ricci. Redouane Nadja, one of Matteo Ricci’s two administrators, enjoys watching how some youth begin to trust the staff after having previously endured “educational systems that have broken them.” Prejudices based on the child’s neighborhood, religion or country of origin play a big role in demotivating students, he said.

“We need to break the image that if you come from an immigrant family, you must be up to no good,” Mr. Nadja said. With his strong knowledge of the local urban slang and the latest from the Instagram accounts of pop artists, Mr. Nadja is an authority figure the Brussels-bred youth at Matteo Ricci can relate to. “I tell the young folk I meet to be proud of where they come from and to work hard.”

Mr. Nadja found about Matteo Ricci’s impending opening when he saw the school’s banner as he sat in his cousin’s café on the other side of the boulevard. He decided to apply for work at the school. He is one of three school staff members who are of immigrant descent out of 30 teachers and administrators. Roughly three quarters of the students here are not white.

Anne L’Olivier, the director of the school, and Mr. Deneef say that applicants of Arab and African descent with the proper skill set to work at the new school were hard to find—part of the reason Matteo Ricci is being launched in the first place. “That’s the issue,” Mr. Deneef said. There are few professionals and educators of immigrant descent in the Belgium workforce especially when compared to the population numbers they represent.

When he applied, Mr. Nadja believed that a Catholic school offered a distinct advantage as a learning site in Belgium, a country more comfortable these days with cultural expressions of secularity rather than faith. “Some schools want to hide religion,” he said.

Ms. L’Olivier said that the Catholic nature of the school was actually a draw for Muslim parents. “A lot of Muslim parents have come here saying, ‘I know that this is quality education and that here we can talk about God,’” Ms. L’Olivier told America.

Dealing with different religious backgrounds within the staff and classrooms is a challenge that Laurent Salmon-Legagneur, S.J., a Jesuit scholastic working at the school, has gladly undertaken. Last December, he organized a Christmas celebration and asked Mr. Nadja to help him.

At the Christmas party, the teenagers wrote what the words “peace and hope” meant to them on pieces of paper and hung them on a tree. Then, two prayers were uttered by those who wanted to—the Lord’s Prayer followed by the Quran’s first Surah.

“Brother Laurent came to ask me if the Quran’s Surah he had chosen was appropriate for the celebration,” Mr. Nadja said, his eyes lighting up. “He thought about the students of other religious denominations, without me or the students ever asking for anything.” For Mr. Nadja, this was evidence of Matteo Ricci’s commitment to inclusivity. “It was a moment of communion; it was wonderful,” he said, speaking of the Christmas gathering. He had never seen any other school in Belgium do anything like it.

The school’s board decided to deal with potential clashes surrounding religion and culture as they come up—and if they come up, Ms. L’Olivier said. However, a few ground rules in a highly secular society like Belgium’s are that Muslim students cannot wear the veil on the premises or take a day off for the Islamic Eid celebration—policies that may seem insensitive to American sensibilites but which raised no eyebrows among the parents of Muslim students at Matteo Ricci who are long familiar with Europe’s preferential option for secularity.

In a previous institutional life, the school building was home to the Maïmonide Jewish school. Now remnant Jewish symbols and equipment abound throughout the school—from wash basins in the lunchroom for ritual cleaning to a Hanukkah menorah left behind in the school’s kitchen. The board decided to keep most of these symbols, including classrooms with Hebrew names. Whenever parents or children ask why a Star of David is the first thing people see when entering the school the staff answers that it is simply part of the school’s legacy.

Matteo Ricci’s self-professed aim to serve immigrant communities—its namesake, Matteo Ricci, S.J., is after all known for his intercultural work in 16th-century China—is not its only bold course. Ms. L’Olivier intends to use the school as a platform for educational innovation. “It’s been 10 years that I dreamed about doing things differently,” she said. Now she has a chance. Regular meditation time, creative workshops, classes directed by two teachers at once and active student participation in shaping school rules will be among the experimental initiatives at Matteo Ricci, she said.

Mr. Deneef acknowledges that Jesuits in Europe have been slower to focus on underserved communities when compared to already mature educational efforts in North and South American like the Fe y Alegria and Cristo Rey networks, but he is confident that similar projects will develop in Europe, responding to local needs. A handful of other similar Jesuit schools are already being created in other parts of Belgium and in France, he said.

“The rise of immigrant communities, but especially Muslim communities, makes us think of how we can ensure that people within the same city continue to communicate with each other,” Mr. Deneef said. “Everybody knows that it starts with a school.”