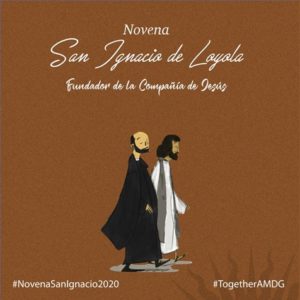 A novena to St. Ignatius of Loyola was held from July 23 to 31, at the initiative of the Union of Jesuit Alumni of Latin America and the Caribbean (UASIALAC), to pray for the end of the pandemic and the victims it has caused.

During nine days, they invited the whole world to gather at 19:30 (UTC -5), until the Patron Saint’s feast day of our great saint, to pray together for the sufferings of the whole world due to the Coronavirus disease. Each day, a different country (member of UASIALAC), beginning with Colombia – the originator of this initiative – took the novena in hand, following the texts collected by the Jesuit Inteprovincial Theologate “San Pedro Fabro” of Santiago de Chile. Those texts were illustrating the meditations and the biography of St. Ignatius. For example, on the fourth day, Venezuela presented the moment when Ignatius of Loyola was in Manresa and when he developed the spiritual exercises. The Superior General, Arturo Soza, from Venezuela, had joined on that day to bring his philosophical, theological and spiritual experience and to explain how the “Magis” was formed.

More than ever, in these difficult times of pandemic, when no one is spared, this kind of initiative allows us not only to rediscover the one who did not hesitate to go out in front of danger in total trust, but also to give everyone – no matter what their background or sensitivity – the key that allows us to live today in the way of Jesus: loving and serving in everything.

Nine Moments of the Novena to Saint Ignatius