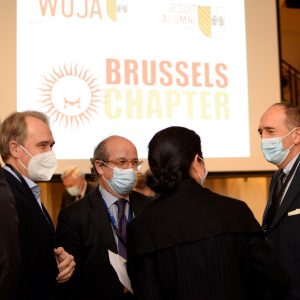 About two months ago, a special event took place in Brussels (Belgium): the inauguration gala of Jesuit Alumni of Brussels (JAB), a new group among the WUJA-galaxy.

In spite of the difficulties due to the pandemic, more than fifty persons gathered in the evening of 2 December 2021 in the Château Sainte-Anne of Brussels. Those people had at least two things in common: living in Brussels (most of them are expats from different countries of Europe and even further), but especially the fact to be alumni /-ae of Jesuit educational institutions.

During the evening organised in partnership between WUJA and the Jesuit European Social Centre, led by Peter Rozic SJ, several speakers addressed the guests to present some initiatives in link with the Jesuits in the capital city of Europe.

Above all, the evening was the kick-off event of Jesuit Alumni of Brussels, a new association which aims at uniting former pupils and students of Jesuit institutions of the entire world living or working in Brussels. The group was created by a few alumni, including Alain Deneef, president of WUJA and proud citizen of Brussels; it’s chaired by Shéhérazade Semsar-de Boisséson, a French-Iranian businesswoman, active among others in the media branch.

The city of Brussels hosts numerous international institutions and companies. Like larger cities of the planet, the city tells a high number of Jesuit alumni from different countries and active in an impressive range of occupations and involvements, notably related to the European institutions.

From an historical point of view, WUJA mainly federates alumni groups in direct link with the respective Jesuit educational institutions, this new type of local groups is beginning to spread. A similar phenomenon has been appearing in the United States for years, where Loyola Clubs were founded in cities like Washington DC, Cleveland, etc. In Europe too, a similar chapters exist, like in London for alumni of colleges in Ireland. During his speech, Alain Deneef emphasized that “the future of WUJA will be a harmonious combination of its present vertical structure with a horizontal network of urban chapters of alumni who wish to remain close to the Society of Jesus”. Such groupings will be formed elsewhere in the world: given the massive presence of Jesuit alumni in many other metropolises, there is clearly great potential!