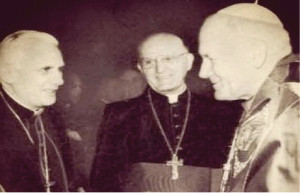 It was a surprise when from the loggia of St. Peter, Cardinal Tauran said ‘… Habemus Papam: Giorgium Marium Ecclesiae Sanctae cardinalem Bergoglio’. It was an even greater surprise though, amongst the Jesuits.
There had been no indication whatsoever during the conclave and certainly not in the learned articles and expert comments that we read in the press or heard on television.
If the Jesuits, like others, expressed some preferences in private conversations, I do not remember having met any “tifoso” of Bergoglio … Contrary to what some people think or write, the Jesuits do not rally behind one of theirs and do not act as a lobby at the Vatican! Moreover, the paradox is that never before, the Jesuits were so minimally represented in a conclave. Out of the two voting Jesuit cardinals, one, the Indonesian Cardinal Julius Darmaatmadja, was absent for health reasons and the second was no other than Jorge Mario Bergoglio, archbishop of Buenos Aires. And this only Jesuit present at the conclave was elected Pope …

One can learn from looking back into the past: despite what is said and written about the ‘power and influence’ of the Jesuits in the Vatican, only two of them were ever considered serious contenders to the seat of St. Peter: the (holy) Cardinal Robert Bellarmin, in the seventeenth century and, if the rumours are correct, Cardinal Carlo M. Martini, retired archbishop of Milan, in the conclave of 2005. Additionally, the return of a ‘Religious’ on the seat of St. Peter is also unexpected: the last pope coming from a religious order is a Benedictine, Gregory XVI, who was elected in 1831.

Sibi … nomen imposuit Franciscum: the choice of this name is striking. It comes as a breath of Pentecost in the middle of Lent. Even more so, since this choice is followed by many signs, symbolic perhaps, but conducive to think. FRANÇOIS. One immediately thinks of the Poverello: Francis of Assisi is one of the most beloved saints amongst the Christians and far beyond the circles of the Catholic Church. He is the patron of Italy and is revered among the followers of other religions. It is not a coincidence that the two large religious meetings (under John Paul II and Benedict XVI) took place in Assisi. Some were surprised that no pope had ever chosen this name. In fact, the saint of Assisi is the first “François” in history. The young Bernardone, born during the absence of his father, a wealthy cloth merchant, while travelling in France, received at baptism the name of Giovanni. After his return to Assisi and very satisfied with things he had done in France, enthusiastic Bernadone dad called his son Francesco (Small Frenchman). This name is relatively recent (thirteenth century) and Giovanni Bernardone is the first to be named Francis.

However, during his Jesuit training, Bergoglio was fed spiritually by another Francis. He knows well Francis Xavier, one of the closest companions of Ignatius of Loyola. It is difficult to figure out he did not think about it. Francis Xavier is THE missionary, the one who went to the borders of the Christian world of his time, to proclaim Christ. When Pope François invites the priests, as he did during the mass on March 28, to “go to the outskirts, to bring the Gospel to those who have nothing at all, where are evil, injustice, pain and ignorance”, it is the same missionary movement.
The borders of the Church and the outskirts of the Christian world do not pertain to the scope of geography. They relate to other realities, i.e. existential, cultural, socioeconomical and religious realities where the values of the Gospel are insufficiently present.
One can think, for instance, about the prevailing indifference to religion, about deadly ideologies, about the growing marginalization of the weak and vulnerable and the challenge of interreligious dialogue.
It is not unreasonable to suggest that Cardinal Bergoglio accepted this election in a simple Ignatian way, that is to say, as a “mission” in the service of Christ and his Church, even if this mission, in his particular case, has an extraordinary and exceptional dimension.

When he made his final vows in 1973, the young Jesuit priest made a special commitment to obey the Pope “regarding the missions”. In the present circumstances, is it not the conclave that expresses the voice of the Church and assigns as a special mission to Cardinal Bergoglio, to govern the Church and to guide the ship of Peter? Hopefully Pope Francis, former master of the novices and Jesuit Provincial, is well aware of the Ignatian dimension of any religious government what is called cura personalis emphasizes the interpersonal dialogue and collegiality in the government of the Church. In this respect, the fact that he immediately preferred the title of Bishop of Rome to any other and avoided that of Roman Pontiff perhaps reveals something. The Pope is, above all, the successor of St. Peter as bishop of Rome. This title is meaningful and carries many hopes. The ecumenical dialogue might resume on new bases. The other Christian would more easily recognize the primacy of Peter’s successor if the ensuing ministry of unity and communion were exercised differently. These are a few simple ideas and a lot of hopes as well … They are raised in this Easter season, as we are getting closer to the celebration of Pentecost when Peter, the fisherman of Galilee, boldly addressed the people of Jerusalem and said, quoting the Scripture: “In those days I will pour out my Spirit upon all. Their sons and daughters will prophesy, young men shall have visions and old men make dreams “(Acts 2:17). I no longer belong to the “young people”, I hope I am not yet an old man, but I am not prohibited from having visions and dreams. 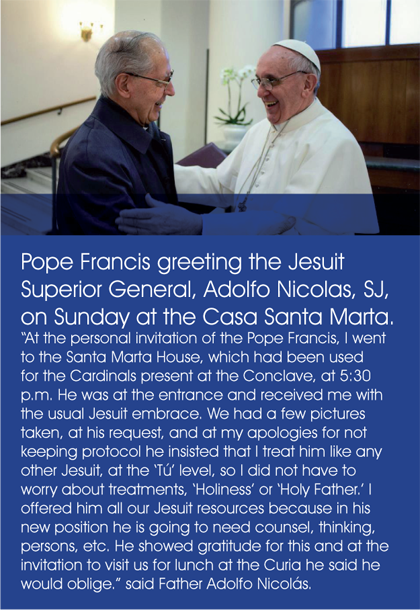 Etienne DEGREZ sj is an alumnus of Collège Saint-Michel in Brussels Belgium. After his novitiate in Arlon (Belgium), he studied philosophy and sociology at Louvain (Belgium). In 1971, he left to India, studied the Bengali language (Calcutta) and theology (in Pune, near Mumbai). Ordinated in June 1976 (in the church of Collège Saint Michel), he returned to Calcutta where he was in charge of the ‘Shanti Nir Youth Centre’ for several years. This a centre for disadvantaged youth located in the southern outskirts of the city. At the same time, he was in charge of the education of young Jesuits in Calcutta. From 1997 to 2003 he was the Vice-Provincial of India in New Delhi. From 2003 to 2012, he was Assistant Commissioner for homes and international works of the Society of Jesus in Rome. He will soon join his new post in Kathmandu (Nepal) where he will again be involved in the education of Jesuit novices.