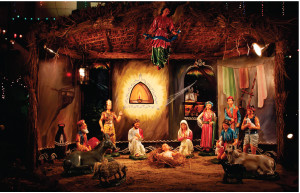 The first ever crib set from India for the International Nativity Museum of Bethlehem, designed by artists of Kolkata based organization Church-Art, was unveiled here today by Hon’ble Chief Minister of West Bengal, Mamata Bannerjee, at the St Xavier’s campus in the presence of Father J.Felix raj, SJ, Principal of St. Xavier’s College and other dignitaries.

“It is a matter of great honour and prestige that artists from Kolkata-based organization, Church Art, got to design and present the crib set to the International Nativity Museum of Bethlehem, said father J.Felix Raj.

“The India setting of the crib is a welcome step to express that Christ transcends all cultures, and belongs to the whole world. Jesus belongs to India and to the people of this great land too as the crib rightly depicts. The crib is a tribute to all those who have to incarnate Christ’s message in our land.” Said Dr. George Plathottam, Secretary, Office of Social Communications, Catholic Bishops Conference of India.

“The Indian crib consists of 12 figurines of various proportions and characters. Some of them are of two feet in height and include humans, animal, bamboo huts with mud walls etc. these figures blend in intricately to enact a native Indian village scene. Three kings and three shepherds depict the mosaic of India cultures. Our Lady and St Joseph are dressed in typical Indian outfits-dhoti and sari. The chubby baby Jesus is wrapped in a white vest. Of the two animals placed on either side of the crib, one is a camel from Rajasthan and the other is a cow from north India.

“We have been trying to have an Indian crib set for quite some time. We are very happy to host one now,” said artistic director of the International Nativity Museum, Elisa Nucci, in a message. “The dimension of our standard museum display is 88cm high, 44cm wide and 104cm long,” said the Museum Director Salesman Fr Mario Murru.

Mr Ganguly has been in contact with the Museum authori-ties for the past one year planning the project. The crib set is made of fiberglass and requires a display area of 24sq. ft ( 6 feet by 4 feet).

The much-visited Museum in Bethlehem is located in an 18th Century building which once served as the Salesman provincial house and an orphanage. The museum was started in 1999. The International Nativity Museum of the Salesman at Bethlehem has been appreciated and promoted by the UNESCo, and has been sustained by the Palestinian National Authority and the Italian government. The Museum is visited by pilgrims from across the world.

Graduated from St. Xavier’s College in Kolkata, India in 1982