It is with great sadness and deep emotion that WUJA learns and shares with you the news of the death of Father Adolfo Nicolás, SJ, on Wednesday 20 May, at the age of 84. The former Superior General of the Society of Jesus was very close to the youth, as a teacher of young novices in Asia, but also assured WUJA of all his support; spiritual of course, but also concrete by having taken part in two world congresses: the one of Bujumbura in 2009 and the one of Medellín in 2013. 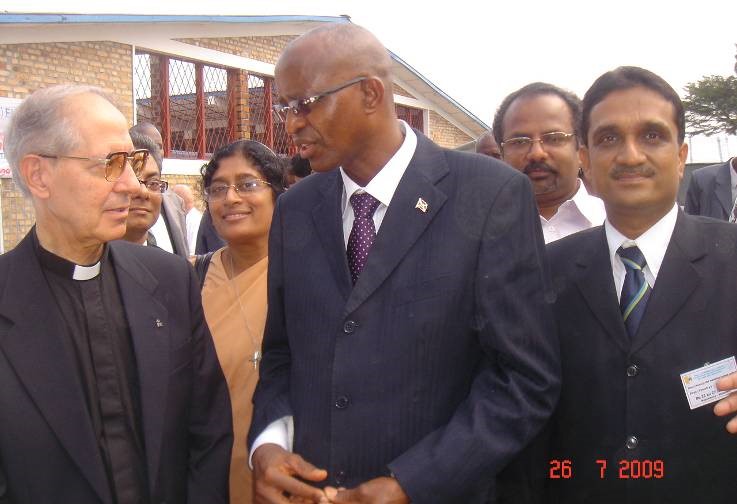 At the World Congress of WUJA in Bujumbura in 2009: on the left Father Adolfo Nicolás, SJ, then Superior General of the Society of Jesus; with, in the center, the then Vice-President of Burundi, Mr. Yves Sahinguvu (Lycée Saint-Esprit de Bujumbura, class of 1967); on the right, we find Naresh Gupta (Collège Saint-Xavier de Calcutta, class of 1982), current Secretary General of WUJA

Adolfo Nicolás Pachón was born on 29 April 1936 in Villamuriel de Cerrato, a quiet little town in Castilla y León on the road from Valladolid to Burgos. The son of a Spanish soldier, he is the third of four siblings. He left the province at an early age for the capital, where he went to study at the College of the Immaculate and St. Peter Claver, better known as the “Colegio de Areneros”, which has since merged with the College of Chamartin to become the College of Our Lady of Remembrance, one of the best schools in Madrid. After his studies in Madrid, he returned directly to the Jesuit novitiate in Aranjuez, also an occasional residence of the kings of Spain. In 1960 he obtained a degree in philosophy from the famous “Complutense”, the University of Alcalá de Henares, the birthplace of the great Cervantes. 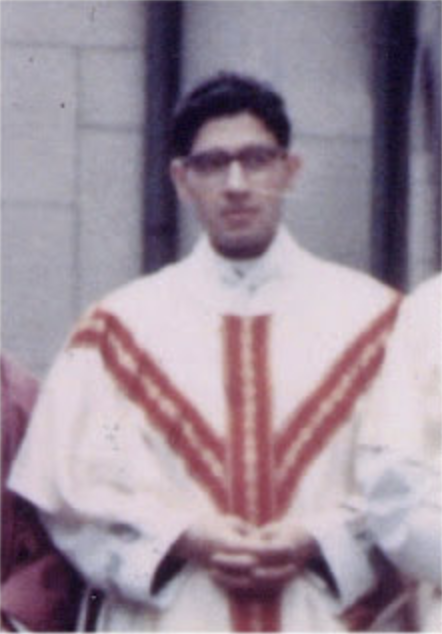 At his request, he left Spain to be sent to Japan, where he first spent a whole year learning the local language and culture. After studying theology at Sophia University in Tokyo in 1964, he was ordained there three years later, on March 17, 1967. In 1968, he returned to Europe for three years to write his thesis “Theology of Human Progress” which made him a Doctor of Theology at the Gregorian University in Rome. He thus specialized in the study of the theologies that shaped the Second Vatican Council, of which he himself was a contemporary.

After returning to Japan, where he taught systematic theology at Sophia University for a few years, he was appointed director of the Pastoral Institute of Manila, Quezon City campus, Philippines, where he moved from 1978 to 1984. He then returned to Tokyo to look after the students of Sophia University from 1991 to 1993, and then became Provincial Superior of the Jesuits in Japan until 1999. After that, he spent three years in a parish among poor Filipino and Asian emigrants from Tokyo and continued to teach at Sophia University.

In 2004, he became moderator of the Conference of Jesuit Provincials of East Asia and Oceania, which he presided until 2008, when he was elected by his peers as the 30th Superior General of the Society of Jesus. Although this office is usually for life – even though his predecessor Peter-Hans Kolvenbach had also resigned – he resigned when he reached the age of 80, arguing that “the Society needed someone with more energy and better form to lead it in an increasingly complex world. 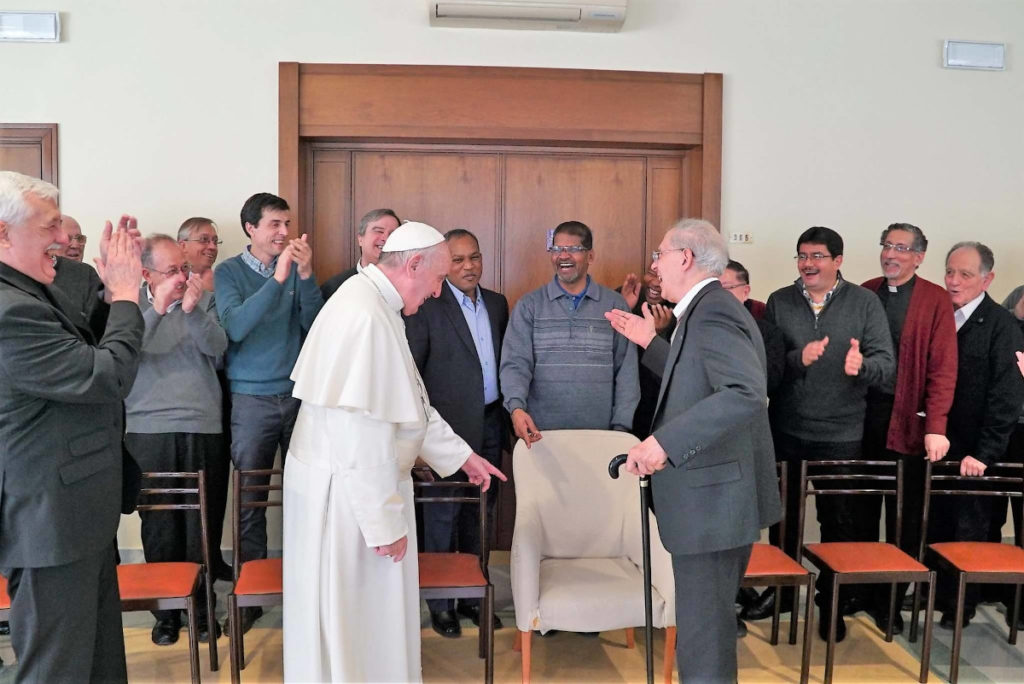 During Father Adolfo Nicolás’ farewell to the Roman Curia in February 2017, Pope Francis insisted that “Nico”, as he was known among friends, take the seat of honor

During his eight years as Superior General of the Society of Jesus, he never ceased to insist on the universality of the Jesuits’ vocation and mission and on the depth that characterizes their life.

After resigning at the 36th General Congregation of the Society, which opened in Rome on October 2, 2016 and elected the current Superior General, Venezuelan Arturo Sosa, sj, Father Adolfo Nicolás returned to Asia. First in the Philippines, to take care of the Pastoral Institute in Manila, until August 2018, when he made his last overland journey back to Tokyo.

Last photo of “Father Nico” in Manila, among the students of the Pastoral Institute of Manila

According to his peers, Father Adolfo Nicolás was a “happy Jesuit”. He confided to the novices in Indonesia in 2009: “I hope you will be happy Jesuits because you would be useless if you were unhappy Jesuits.” He was very concerned about the novices and young students interested in entering the orders. He used to tell them: “Be happy, be free, center yourself on God and on Christ!” To the young Jesuits he would say: “Be yourselves and let Christ work through you!”. 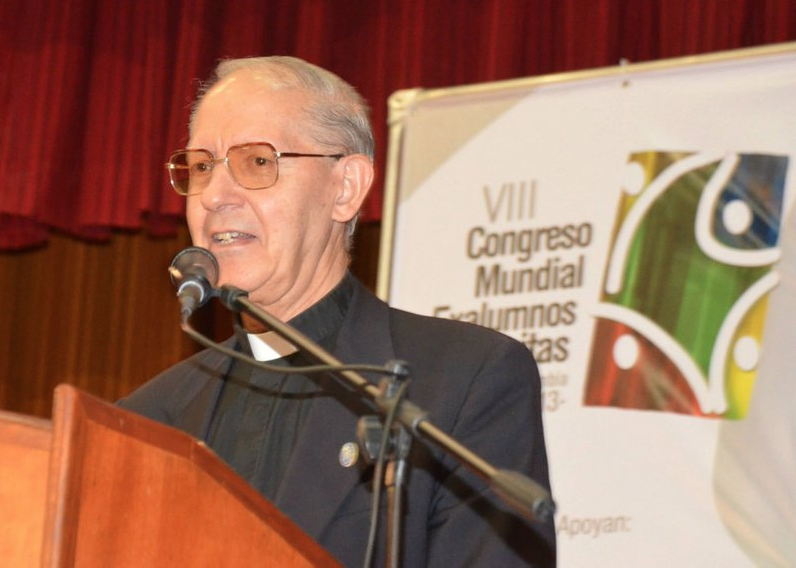 Father Nicolás supported all kinds of initiatives, especially WUJA congresses like the one here in Medellin in 2013

Arturo Sosa, sj, spoke of him in these words: “a wise, simple and free man; entirely and generously dedicated to service; moved by those who suffer throughout the world, but at the same time filled with the hope flowing from his faith in Our Risen Lord; an excellent friend, who loved to laugh and make others laugh; a man of the Word.”

The current President of the Jesuit Conference of Asia-Pacific, Father Tony Moreno, sj, refers to him as someone “who was not known for putting himself forward, who hated clericalism in all its forms and who did not want to be called ‘Emeritus’. He wanted to be known as he was, without the titles.”

It is with a certain emotion that our president, Alain Deneef, addresses these few words: “I met him four or five times and he was a modest man whose advice and reflections were revealed in the course of a harmless sentence to which the interlocutor had every interest in being attentive. It was he who completed Father Arrupe’s famous phrase (“men and women for others”), already clarified by Father Kolvenbach (“men and women for and with others”), by saying: “men and women of depth, for and with others”.” 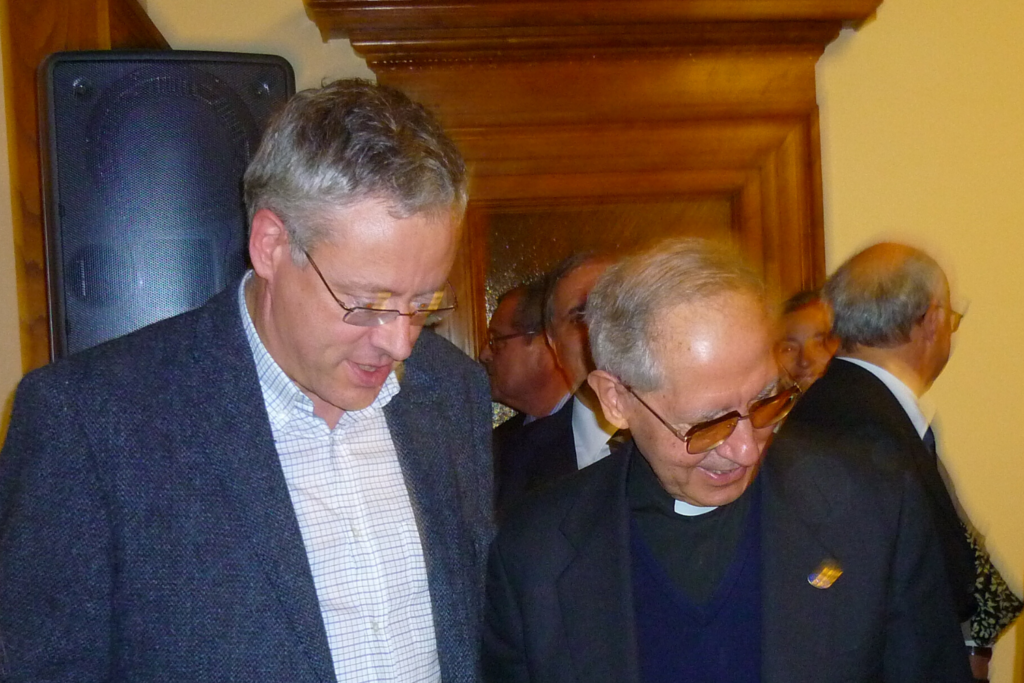 Alain Deneef and Adolfo Nicolás, sj, together in Rome in 2011

François Marinx, communication advisor and digital coordinator at WUJA, recalls: “During the Bujumbura Congress in 2009, a meeting with Father Nicolas was organised for the young participants of the congress. I had the joy of taking part in it alongside about thirty other alumni from all over the world. In all simplicity, he shared with us some reflections on our congress and the dynamics of the alumni in the world. He was very friendly and approachable, particularly by taking part in a long photo session with the young people. Four years later, at the Medellin congress, he gave up his originally prepared speech to evoke Jesuit education through four images. He knew how to captivate and touch his audience in order to convey the essential. I am grateful for these moments which have marked me greatly.” 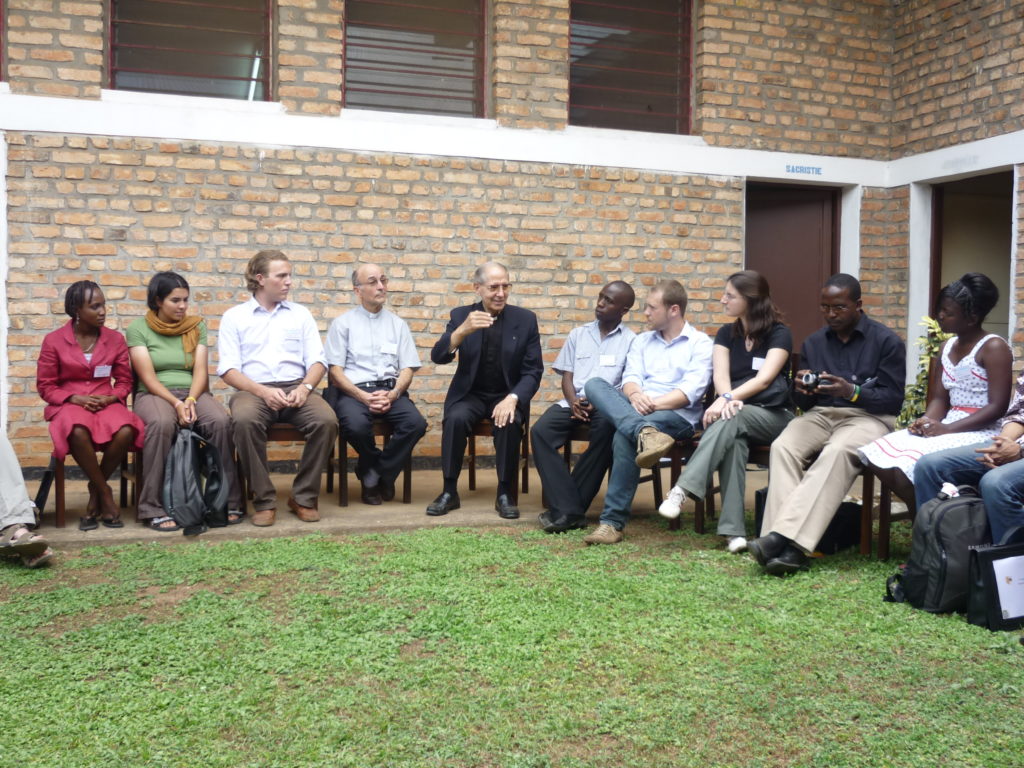 Father Adolfo Nicolás, sj, at the 2009 congress in Bujumbura