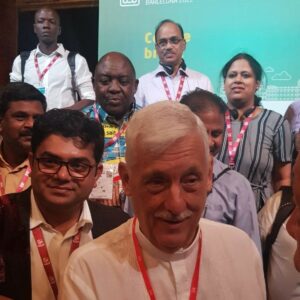 The 10th World Union of Jesuit Alumni/ae Congress was held in Barcelona, Spain at Sant Ignasi School, Sarria from 13 – 17 July 2022.  The link to the program is  www.jesuitsalumnibcn2022.org.  Here you will find the program content, activities and presentations.

Key themes addressed at the Congress were Education, Ecology, Spirituality, Migration and Women.  For Saint Ignatius, Barcelona was very much at the crossroads in his interior and exterior pilgrimage.

Father General in his hour long address made numerous references to the Apostolic Preferences of:-

We had outstanding addresses by Fr Jose Alberto Mesa SJ on Education, Fr Dani Villaneuva, SJ on Networking and Chris Lowney, of ‘Heroic Leadership’ fame and the Cannonball Experience; along with many others.

We had a one day visit to Montserrat, Manresa and, of course, La Cova – all central to the formation of Ignatius.

There was a visit to Sagrada Familia, the magnificent Gaudi creation, which was preceded by an address by Fr J-P Hernandez, SJ who is an expert in art and theology.

There were numerous social events and networking occasions with alumni, Jesuits and friends from around the world.

Of interest was the fact that the Examen, central to Ignatian Spirituality, was introduced to schools first in Australia. Now it is universally practised in Jesuit schools.

At the Congress, our President of 9 years, Alain Deneef (Belgium) retired and Francisco Guarner (Spain) was elected as the new WUJA President.

Our next WUJA Congress will be in Yogjakarta, Indonesia in 2025.

WUJA was founded in Bilbao in 1956.  Its three languages are English, Spanish and French.  We had a very useful discussion at the Council Meeting given its 66 years of existence and now having hosted 10 Worldwide Congresses.

Its membership fees are modest to support a light structure.  It was founded before Vatican II and before the tenure of Fr Pedro Arrupe, SJ.  At the time there were some 32,000 Jesuits worldwide.

Outgoing WUJA President, Alain Deneef, had written a paper “Quo Vadis WUJA”?  We discussed the Council, its characteristics, need for renewal and structure.  There were questions around – Are we still relevant?  If yes, in what sense?  What should we do to help the Society of Jesus that made us who we are?

Some important observations are that we are not the only lay people helping the Jesuits, we are not representative of all Alumni worldwide and we are not in the position, nor are we willing to substitute local associations.  We are a fire that kindles other fires.

These observations and thoughts will animate the incoming Council.

On another note, below is an image of the Bunya pine in the grounds of St Ignatius’ College, Riverview, Sydney and the plaque regarding its planting.

The Bunya pine is flourishing.