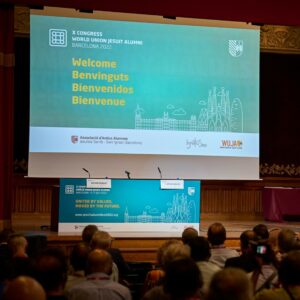 Barcelona’s San Ignacio College, at the heart of the renowned Sarriá quarter, hosted the 10th international congress of Jesuit alumni from the 13th to the 17th of July 2022 in true Spanish style for the benefit of its international attendees. With Jimmy Burns, David Hurst and Juan N. Garcia-Nieto  we  represented Stonyhurst amongst a cohort of alumni from 827 schools and 204 universities coming from an assortment of countries which included, but was not limited to, the US, India, Indonesia, and the Democratic Republic of Congo.

Serving as a reminder of the wider spiritual community that we are part of and commitment that we must have as alumni towards social justice and the common good, we were the first ever collective to attend on behalf of the Stonyhurst committee and to learn from the experience for the benefit of others within the wider Stonyhurst community. At its heart, the conference was a call to wake up from  the nostalgia of our  school years and to intentionally apply the common values taught whilst at school to bring meaningful change in our local and global society in the here and now.

The Congress was organised by WUJA, the independent lay led international network of Jesuit alumni. Its aim is to build and foster relationships between alumni from both Jesuit schools and universities across the world, while nurturing Ignatian thought and spirituality.. As well as a networking tool, the  events and talks  intend to stimulate and inspire Jesuit thinking across the world and a Congress every four years. The next one will be held in Yogyakarta, Indonesia, where there is a strong network of Jesuit schools and Universities, with a Christian community dating back to 16th century Jesuit missionaries.

This year the Congress’ theme was “united by values, moved by the future”. Inspired by Ignatius’s 500th year conversion after the battle of Pamplona the general of the Jesuits, the Venezuelan Arturo Sosa S.J., addressed the Congress in the spirit of his predecessor’s speech to the alumni in Valencia in 1973. Referencing  Fr Pedro Arrupe who changed the course of the Society through his iconic speech of “men and women for others”, Fr Sosa encouraged alumni to be “partners in the mission of reconciliation and justice in today’s world”. Whilst reminding us that the greatest gift of Jesuit education is that of “continuous discernment”, this gift should be continuously expressed in “love and service” to others in all shapes and forms.

The Congress began with a day trip (and 7.30am start!) to two of the most iconic spiritual sites in the life of Ignatius. Montserrat, a monastery located in a dramatic and stunning mountain range and Manresa, a cave in the outskirts of a beautiful Spanish medieval town. These sites where were Ignatius had his conversion by laying down his sword and writing parts of the now famous Spiritual Exercises. Taking in the surroundings of where he was inspired, it served as a reflection on our own personal conversion and every-day continuous discernment.

The Congress offered  a variety of thought-provoking and socially relevant talks which appealed across all age groups and nationalities. This included talks on Women, Ecology, Migration, Technology, and Investment. Speakers such as, Chris Lowney, former JP Morgan’s senior manager and best-selling author of “Heroic Leadership”, reflected on  the way forward for Jesuit alumni, Mary Evelyn Tucker, Professor at Yale University on Ecological Spirituality, paid tribute to the Jesuit palaeontologist, Teilhard de Chardin. Dr Lisa Hehenberger, from Barcelona’s ESADE Business School, on ESG, discussed the influence of impact investing. Nuria Calduch, Secretary of the Pontifical Biblical Commission, considered  the role of women in the Church. These were all complemented with workshops for group reflection and to propel joint action plans for the future.

Alongside the talks, there was a  programme which included social visits to Jesuit social organisations, such as “Migra Studium”, Jesuit Refugee Service and Fe y Alegria schools. Encouraging alumni to get involved with their own local projects to help the most underprivileged and forgotten members of our society, it was a reminder of the importance of putting our faith into action

The Congress opened with a solemn mass celebrated by Fr General, at the iconic gothic basilica of Santa Maria del Mar and ended with a private visit with the architect of the (still in construction) Sagrada Familia. As young attendees,  we became quite close with the youth wing over the four days, with new relationships formed over the youth focused workshops and nightly social gatherings across the vibrant city of Barcelona, culminating in a unique spiritual, cultural and networking week.

The Congress in Barcelona opened the eyes of the attending OS’ on the opportunities and potential of such a global and active network. As well as a unique and personal insight into the life of Ignatius, it reminded us of the importance of being men and women for others in our everyday life too. 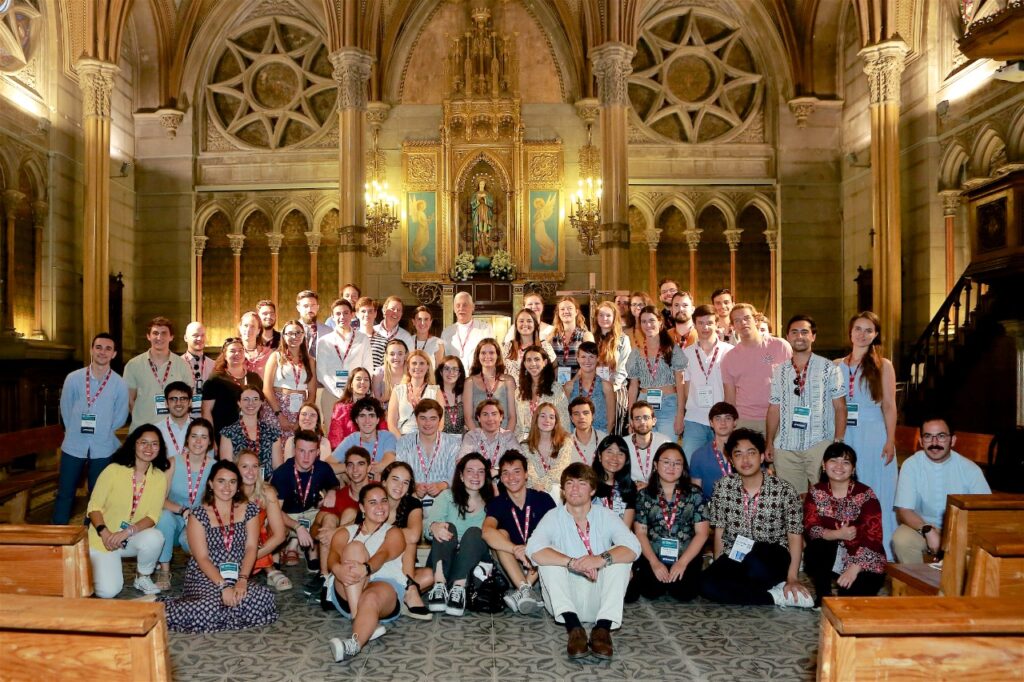